Blistered shishito peppers are a tasty and some times surprising snack - about 1 in 20 of these sweet peppers have an extra spicy kick!!  They make an excellent quick healthy appetizer and are naturally low carb and gluten free.

One of the things I was excited to find in our local supermarkets recently was shishito peppers!

I have had them at restaurants a couple of times and they are a great appetizer or snack when you are out for a drink - totally tasty and also low carb for those who care about that.

Have you tried shishito peppers yet?

What is a shishito pepper?

Shishito peppers are a pepper much like a green or red pepper that is native to Eastern Asia, specifically Japan.  Their flavour is milder and sweeter than a green pepper and has a bit of a citrus note.

One of the things that make shishito peppers so fun to eat is that although for the most part they have a pretty mild spice there is usually one or two in the bunch that are a fair bit spicier than the others.  Not as spicy as say, a jalapeno, but spicy enough to notice the change in flavour.

I had yet to taste one of these phantom spicy peppers until today!  This batch of shishito peppers I finally had a spicy one!

How to make blistered shishito peppers

Start with a cast iron skillet heated to medium heat.

Put about a tablespoon of avocado oil or olive oil in the skillet, then add the peppers.

You want to 'blister' or 'char' the outside skin of the peppers, so try to have as many of the peppers as possible touching the bottom of the skillet.  Allow the peppers to stay in one spot for 10-15 seconds or so and then toss them and move them around a bit to blister all the sides of the peppers.

When the peppers have begun to blacken and colour nicely on almost all of the sides, and the crushed garlic to the skillet and toss the peppers around for another minute or so to give the garlic a chance to cook.

Transfer the shishito peppers to a serving plate, sprinkle with a pinch of coarse sea salt, and garnish with a couple of slices of lemons - I really love the flavour the added citrus gives to the peppers!

You're going to love these shishito peppers because...

This recipe for blistered shishito peppers is suitable for the following diets:

If you like this recipe for blistered shishito peppers, you might want to check out some of our other tasty snack recipes: 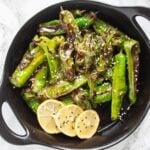