Filled with warming spices like cumin and cinnamon with just a touch of heat, this Moroccan chickpea soup is simple to prepare but packed full of flavour!  Easily made in the Instant Pot or stovetop, this soup is one you don’t want to miss!

I don’t even know where to start with this soup! It just has SO many amazing things going for it!

First, this Moroccan chickpea soup is a total flavour bomb. The spice mix is just perfect! Warm, smokey, and complex with just the right amount of spice.

Just as important, is how super easy this is to make. The list of ingredients is long, but it’s mostly spices, and the remainder of them are likely already in your pantry, and the steps are few.

We had this a few times over the last couple of weeks and it never fails to satisfy.

They are super economical, and they are required for falafel, which we eat a fair amount of.

One of the things I really love my Instant Pot for is rehydrating chickpeas. It’s common for us to cook up a bunch in our pot and keep them in the fridge for later use, or even throw them in the freezer.

I’ve written this recipe a couple of ways so that you can make it either with dried chickpeas with the use of a pressure cooker like the Instant Pot, or stove top with chickpeas that have already been cooked.

How to make Moroccan chickpea soup in the Instant Pot

If starting with dried chickpeas, you will need to give them a bit of a precook first. Add them to your Instant Pot or pressure cooker, cover with water, then cook on high pressure for 15 minutes and drain them before moving to the next step.

To start the soup, gather and chop all your ingredients. I like to have everything ready and waiting to go.

Put the chickpeas, potatoes, celery, onion, olives, tomatoes, parsley and spices into the Instant Pot, then cover with the stock.

Give everything a good stir then set your pot to cook for 10 minutes on high pressure.

When the timer is up, give it a quick release and try not to die of excitement from the delicious aroma that fills your kitchen before you stir in the lemon juice and the chopped spinach.

Seriously, it smells THAT amazing.

Stir the spinach around until it wilts, then take out some broth with a few potatoes and give it a whiz with a stick blender like I did to thicken it up a bit then serve.

This soup is perfectly filling on its own, but if you really want to take it up a notch bake up some no knead bread go to with it. You can thank me later 🙂

Or, try it on the stovetop

To cook this on the stovetop, you need to start with either canned or rehydrated chickpeas.

From there, simply saute up the onion and celery for a couple of minutes with a bit of oil over medium heat.

Then, add the chickpeas, potato, tomatoes, olives, parsley and spices to the pot along with the stock.

Bring to a boil then simmer until the potatoes are tender, about 15 minutes, then add the lemon juice and chopped spinach.

This recipe for Moroccan Chickpea Soup is suitable for the following diets:

If you like this vegetarian chickpea soup, you might want to check out some of our other vegetarian soup recipes: 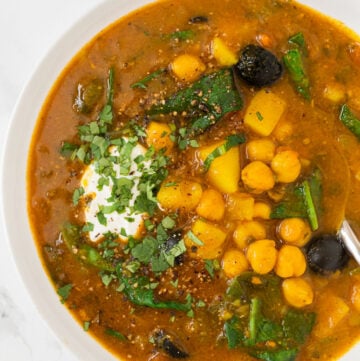 Hi! I'm Courtney and I love sharing delcious, wholesome food with you! Thank you for stopping by Love & Good Stuff! Read More…