Meaty portobello mushrooms star alongside sauteed onions and peppers topped with provolone cheese then stuffed into toasted garlic bread rolls in this tasty veggie version of a Philly Cheesesteak sandwich.

Portobello Mushrooms make an excellent swap for meat in this vegetarian sandwich, and it could easily be made vegan by substituting the provolone cheese and butter for your favourite vegan alternative.

How to make a veggie Philly cheesesteak

First, you are going to want to start by carmelizing the onions.

Heat a large skillet to medium low heat and add some butter to it before adding in the sliced onions.  Pro tip here:  the thinner you slice the onions the quicker it is to get that sweet caramelized flavour out of the onions.  Sprinkling a pinch of fine sea salt on the onions will not only season them but help them to release their moisture which in turn cooks them faster.

It should take about 20 minutes, but you will know that the onions are ready when they reach a nice deep golden colour.

When the mushrooms have browned and reduced, add the sliced peppers and the caramelized onions to the skillet along with the tamari and cook until the peppers have heated through but still have a bit of a crunch to them - about 2-3 minutes.

To toast the bread and put together the sandwiches, heat your oven to 400℉.

Mix together the 1.5 tablespoon of butter with the 2 cloves of garlic and spread on both sides of the interior of the roll.  Toast the bread for 3-5 minutes, or until the butter melts and the bread begins to crisp before removing it from the oven.

Spread out the mushroom and veggie mixture on the bottom half of the bread and top with the provolone cheese slices.

Put the sandwich back into the oven until the cheese melts.  Remove from the oven and serve.

Thinly slice the onions so that they will caramelize faster.

The gills of the mushrooms can give everything a brown colour.  Remove before cooking (like I did) If you don't want that.

The larger the skillet, the more surface area there is for cooking the mushrooms and giving them their best flavour.  Use the biggest one you can find!

This recipe for veggie Philly cheesesteak is suitable for the following diets:

If you like this veggie Philly cheesesteak recipe, you might want to check out some of our other vegetarian recipes: 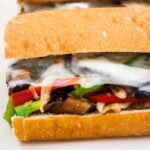