Flammkuchen, or 'flame cake', is a German style pizza of flatbread, creme fraiche, caramelized onions and bacon. With it's crispy cracker like crust and creamy richness it's an irresistible appetizer or light meal.

I was introduced to Flammkucken at one of our local breweries during Octoberfest. As a total pizza lover I just had to try this German pizza, and let me tell you it was everything I wanted it to be and more! The thin flatbread crust is crisp and light and the most perfect base for the cream and cheese. Topped with crispy bacon and sauteed onion, you truly can't go wrong.

Why you're going to love this!

How to make it

Make the flatbread dough. Using a stand mixer (or your hands if you need to) mix together the flour, water and sea salt until it forms a shaggy ball of dough. Add the olive oil and mix until it is incorporated. Knead the dough until it is smooth.

Cook the pancetta and onions. Heat a frying pan to medium heat and add the pancetta, Cook, stirring often, until the fat has rendered and the meat has crisped. Remove the pancetta from the pan then add the onions and cook until they are tender.

Roll out the dough. Roll the dough out into a loose rectangle that is about 9" x 18" in size. Sprinkle some cornmeal across a large baking sheet then transfer the rolled dough to the sheet.

Top the flammkuchen. Using a spoon, spread the creme fraiche out across the rolled dough. Top with the shredded Gruyere cheese then sprinkle on the onions and pancetta.

Bake. Bake at 500ºF for about 15 minutes. You will know when the flammkuchen is done when the edges of the flatbread have browned and the cheesy is nice and melted.

If you liked this German pizza, you might want to check out some of our other German recipes and pizza recipes! 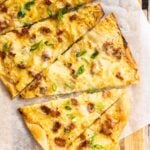 for the flatbread dough: