Pan fried shrimp topped with sweet and spicy bang bang sauce and wrapped up in a corn tortilla with a creamy cilantro cabbage slaw.  Theres only 20 minutes standing between you and these flavourful bang bang shrimp tacos! Bang Bang sauce.  It might be my new obsession.  And I didn’t even think I was a sriracha fan.

In case you don’t know about Bang Bang sauce yet, let me enlighten you.

Bang bang sauce is a spicy, sweet and creamy perfection of a sauce that is made from hot sauce, mayo, and sweet chilli sauce.  Where I have seen it, it usually comes on breaded and fried shrimp which is super yummy, but I was craving something a little lighter than that.

These bang bang shrimp tacos are a spin off the popular appetizer trading the breading for a light pan fry and tossing it into a corn tortilla with some creamy cabbage slaw because, TACOS.

The cool creamy slaw is great with the heat of the bang bang sauce and all around these were a hit – we even converted a new shrimp lover in the house! Honestly, these tacos couldn’t get any easier!

Start by mixing together the sriracha, mayo and sweet chilli sauce to make your bang bang sauce.

Rinse off the shrimp then dry them with a paper towel.

Add the flour to a medium sized bowl and season it well with salt and pepper.  When the shrimp are dry, drop them into the flour bowl and toss to coat. Heat a large skillet to medium heat and add a couple of tablespoon of cooking oil.  Remove the shrimp from the flour bowl, knock off any excess flour and then put them in the hot skillet. Turn the shrimp after cooking for about 90 seconds, and cook on the other side for about 60 seconds more.

To serve, toss the shrimp in the bang bang sauce and add to corn tortillas along with a scoop of the coleslaw. This recipe for bang bang shrimp tacos is suitable for the following diets:

If you like these bang bang shrimp tacos, you might want to check out some of our other awesome taco style recipes:

If you have made this recipe we’d love to see it! Tag us on Insta @loveandgoodstuff.

Loved this? Don’t forget to rate it below! 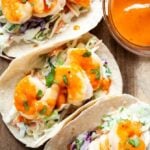 For the bang bang sauce

For the cilantro slaw

I'm Courtney and I love food.

Hi! I'm Courtney and I love sharing delcious, wholesome food with you! Thank you for stopping by Love & Good Stuff! Read More… 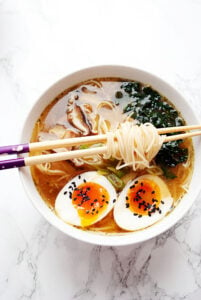 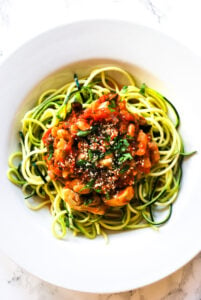 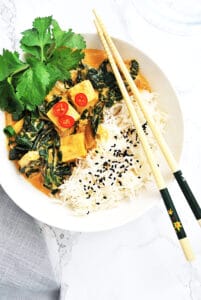 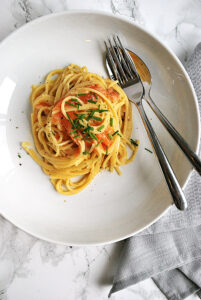 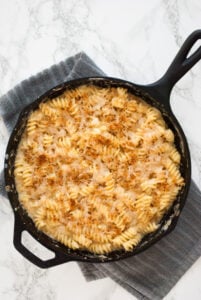 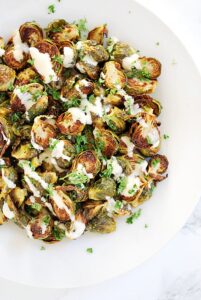